The Virginia Arts Festival Ovation Award honors the lifetime achievement of artists with a special connection to the Hampton Roads region, and will be presented annually.

Ms. Graves had a distinguished career, performing around the world, and now shares her artistry and wisdom with young dancers in our region as well as nationally.

“Our region has given the world many great performers,” said Robert W. Cross, Virginia Arts Festival Executive Director and Perry Artistic Director. “Lorraine Graves is a superb example—an extraordinary ballerina, and longtime principal with the legendary Dance Theatre of Harlem, Ms. Graves had a distinguished career, performing around the world, and now shares her artistry and wisdom with young dancers in our region as well as nationally. We look forward to celebrating her achievements, and the accomplishments of more great artists in the coming years.”

About Lorraine Graves
LORRAINE ELIZABETH GRAVES was born in Norfolk, Va., and began her classical training at the Academy of the Norfolk Ballet under the direction of the late Gene Hammett. She was later awarded full scholarships to the School of American Ballet and the American Ballet Center. She attended Indiana University at Bloomington, where she completed a four-year program in three years, earning a bachelor's degree in ballet with distinction.

Graves began her professional career with the Dance Theatre of Harlem (DTH) and rose to the rank of principal dancer within one year. Three years later, she became ballet mistress, in addition to her duties as a dancer.

Her performance credits with DTH include Giselle, Firebird, Footprints Dressed in Red, The River, Toccata E Due Canzoni, Etosha, Serenade, The Four Temperaments, Agon, Allegro Brillante, and the role of the siren in George Balanchine’s The Prodigal Son. She also had leading roles in Frederic Franklin’s production of Pas de Dix, Prince Igor, and Scheherazade, and Arthur Mitchell’s Rhythmetron, Holberg Suite and Fete Noire.

Ms. Graves’ television credits include the role of Myrta in NBC’s airing of Dance Theatre of Harlem’s Creole Giselle; the Princess of Unreal Beauty in the PBS production of John Taras’ The Firebird; and the closing ceremonies of the 1984 Summer Olympics in Los Angeles.

The chairwoman of the Norfolk Commission on the Arts and Humanities also is a member of the Mayor’s Downtown Task Force; Links, Inc.; and the Todd Rosenlieb Dance Company Board, and is listed in Who’s Who in America, Who’s Who in Entertainment, Who’s Who Among Women, and Marquis’ Who’s Who. 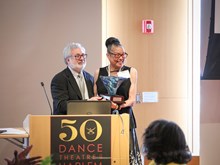 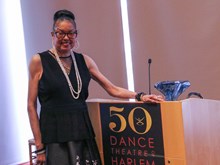 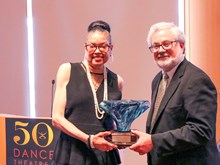