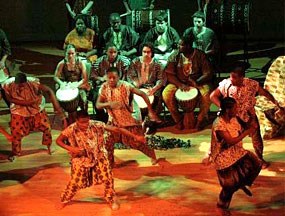 The Rhythm Project is a world percussion ensemble of talented young artists who have earned international acclaim for their traditional authenticity and high-energy performances. Serving as the primary community engagement program of the Virginia Arts Festival, the Rhythm Project bridges the gap between musicians and audience through creative and educational performances that display the vivacious nature of Caribbean culture. With three CD recordings and a live DVD completed, the group constantly moves forward into new artistic territory.

Founded in 1996, the program started in Portsmouth, VA. The Rhythm Project has since then expanded and now serves over 250 fourth through twelfth grade students in the cities of Norfolk, Portsmouth, and Virginia Beach. The Rhythm Project All-Stars is the program's premiere performing ensemble, and the 2009, 2010, and 2019 Grand Champion Winners of the annual Virginia International PANFest held in Virginia Beach, VA. The ensemble has an impressive steel band repertoire that ranges from the calypsos of Len "Boogsie" Sharpe, Ray Holman and Andy Narell to arrangements of well-known classical compositions and popular music by the Jackson Five, and several Caribbean pop artists.

The Rhythm Project All-Stars ensemble has performed for thousands of audience members throughout the United States and Canada, including performances at two of the world's largest Tattoos -- the Royal Nova Scotia International Tattoo and the Virginia International Tattoo. They have opened for Gladys Knight, collaborated with the Girls Choir of Harlem, and performed with George Collinet of Public Radio International's Afro-Pop Worldwide. Additionally, the All-Stars have performed at the 2005 and 2019 Percussive Arts Society International Convention (PASIC), and in 2014 they were featured on NPR's "From the Top" program showcasing outstanding talent in high school students.

Being proponents of multi-cultural education, the Rhythm Project conducts events for young students throughout the Hampton Roads region of Southeastern Virginia; the most significant of which is entitled Rhythm Live!. This fully staged production outlining the evolution of Caribbean Steelpan and Calypso music in Trinidad and Tobago is presented annually to an audience of over 1500 elementary through high school students.

For more information on the Rhythm Project, contact David Longfellow at Virginia Arts Festival: 757-282-2823 or dlongfellow@vafest.org.

Are there open tryouts?

Auditions are held at either a central location for each district or at specific schools within each district in the fall during the first month of classes. Location information and times are available from the band directors and/or choral directors at each participating school.

How long are students involved with the Rhythm Project?

Rising-Stars are accepted for two to three years, after which point they either audition for the All-Stars or age out of the program. Once a student becomes an All-Star, if remaining in good standing with attendance and discipline, they may participate in the program until graduating High School.

Are the groups for hire?

Yes. The groups are for hire. Please call for details or fill out a performance request form.

Print the request form and fax it to David Longfellow, Rhythm Project Director, at Fax: 757-282-2787 or email to dlongfellow@vafest.org.