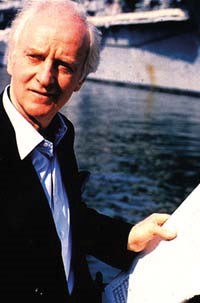 John Duffy: The Institute is a dream come true. May we always give our gifted writers the means to see their works on stage... beautifully sung and acted. Without our writers, our theatre would be empty. May they continue to create wonders. -- John Duffy (1926-2015)

Composer John Duffy wrote hundreds of works -- for symphony, concert hall, theatre, film and television -- many of which reflected his social concerns. He founded Meet The Composer (now New Music USA) which promoted the creation, performance and recording of works by American composers. He also crusaded for changes to ensure that composers would receive a living wage for their work.

Duffy won two Emmy Awards, the first in 1979 for the NBC special, "A Talent for Life: Jews of the Italian Renaissance." He received his second Emmy in 1984 for the nine-hour PBS series, "Heritage: Civilization and the Jews."

Duffy grew up in Woodlawn, the Bronx, N.Y., the ninth of fourteen children born to Thomas Duffy and Anna Quirk, both immigrants from Ireland. The family's fortunes, based on taverns and real estate, soared during the 1920s and then crashed in the 1930s, as did those of the rest of the country.

Educated in Catholic schools, Duffy sang in the choir, played the church organ, and first heard the music of J.S. Bach -- a critical event in his musical development.

When his older brothers enlisted in Army Intelligence and the Paratroopers during World War II, Duffy, though underage, enlisted in the Navy. He became part of the Scouts and Raiders (forerunners to the Navy SEAL Teams), before deploying on the USS Hopping, a destroyer escort in the Pacific. (Duffy's duties eventually included detonating Japanese mines by shooting them from ship deck.) When his ship took fire from shore batteries at Okinawa, the sailor standing on deck next to him was killed. Duffy had to stand guard over the dead man's body till burial at sea in the morning. That night watch determined the course of his life: "Since our time is so fleeting and unpredictable," he later commented, "I knew I had to dedicate my life to music."

After the war, he returned to New York City to study musical composition under the GI Bill. He enrolled in the music division of the New School for Social Research, where he studies with Henry Cowell and Solomon Rosowsky." Summers, he studied with Aaron Copland at Tanglewood in Massachusetts. In addition, he studied at the Henry Street Settlement, and at the Greenwich Village Music School.

It was in the late 1940s that he also became interested in progressive politics. An incident that moved him was the rioting that erupted in Peekskill, N.Y., during a performance by Paul Robeson. "When I saw that, I realized there was more to life than going to hear Charlie Parker and chasing girls," Duffy said. "It was part of my awakening. It influenced the works that I composed...I became an advocate for women and African-American composers who weren't getting a chance."

In 1952 he was hired by director Arthur Lithgow to create a score for a production of "King Lear" for the Shakespeare Festival at Antioch College. Duffy's innovative score combined electronic tape and parts for eleven instruments. That job led to his working with Shakespeare plays at Lincoln Center, the Guthrie Theatre, and the McCarter Theatre. Eventually Duffy became Musical Director for the American Shakespeare Festival in Stratford, CT, working with John Houseman.

In the 1960s, Duffy was commissioned by the United Church of Christ to compose a dramatic piece celebrating the founding of six historically black colleges. He also composed for Broadway and off-Broadway productions such as "Horseman Pass By," "Freeman Freeman," "The Ginger Man," "The Plow and the Stars" and "Playboy of the Western World." His musical "MacBird" (libretto by Barbara Garson), using the plot of Macbeth to comment on the assassination of President Kennedy, was a controversial smash off-Broadway.

In 1963 he was writing a jazz concerto for Stan Getz when the 16th Street Baptist Church bombings took place in Birmingham. Duffy dedicated his concerto to the four little girls who were killed in that bombing. When the music director at Duke University in North Carolina, which had commissioned the piece, said the dedication could not be printed in the program, Duffy threatened to withdraw the concerto. The music director backed down.

His musical life took a dramatic turn in 1974 when he co-founded Meet The Composer (MTC). Through a grant to the American Music Center, Duffy was chosen to run this new organization founded upon the premise that composers deserved to be paid a living wage. Armed with an initial $65,000 in grant money from the New York State Council on the Arts, he traveled the state to persuade various organizations to sponsor composers.

"(Well-known artists like)...John Cage and Merce Cunningham had never received more than a few thousand dollars for a commission they had worked on for a year," Duffy recalled. "We created the composer-choreographer program in which they each got paid $60,000. We wanted the composer's craft and work to be honored with appropriate fees."

Frances Richard, Vice-President of MTC, said, "We'd go into schools, senior centers, hospitals and prisons. The composer was present at every event...that's what made it so potent."

Meet The Composer expanded until it covered all of the United States. Leonard Berstein, Virgil Thomson, Aaron Copland, Max Roach and other leading composers served on the board, or lent their support.

As Meet The Composer became better known, it attracted the attention of the Rockefeller and Ford foundations, Exxon, and the National Endowment for the Arts.

Begun in 1982, the Orchestra Residencies Program placed composers with regional orchestras where they wrote original works. John Corigliano was one of the first recipients of a residency, at the Chicago Symphony Orchestra. "He placed composers with orchestras and they received a salary, which was unheard of," said Corigliano. "They all loved John because he was 'for' every composer, whether 12-tone or tonal, no matter."

Duffy was commissioned by the Sierra Club to compose "Symphony No. 1 - Utah," which received its premiere at Lincoln Center in 1990. He was commissioned by the U.S. Department of the Interior to create "A Time for Remembrance," which commemorated the 50th Anniversary of the attack on Pearl Harbor. Duffy was personally moved by knowing so many in the Navy who were in the War, especially his cousin Edward Quirk, who was killed aboard ship at Pearl Harbor, and his beloved sister Agnes, Ensign, U.S. Navy Nurse, who died from lung disease contracted during her service.

After he retired from MTC, Duffy continued to compose works like the string quartet "We Want Mark Twain," "Black Water," an opera based on the Ted Kennedy/Chappaquiddick incident, with libretto by Joyce Carol Oates." To celebrate the centennial of Newport News Shipbuilding, Duffy wrote "Pride of Virginia" and "Fanfare for Shipbuilders." The librettos for both these works were written by Dorothy Rouse-Bottom, his former wife and past Editor of the Daily Press, in Newport News, Virginia.

In 2005, Duffy created the John Duffy Composers Institute as part of the Virginia Arts Festival. The Institute continues under the guidance of composer Libby Larsen.

Larsen calls Duffy the "Johnny Appleseed of living composers. He knew that the live composer, the person, was being left out of the picture," she said. "His vision was to put the living composer in front of an audience. He could see it."